On September 27th 1864, Bloody Bill Anderson and around 80 of his men attacked the town of Centralia, Missouri in order to cut the North Missouri Railroad line. The Confederate Guerrillas looted the town after blocking the rail line. They also preceded to get drunk on stolen whiskey they found during their plundering. While they were in the midst of looting the town, a train approached from the East containing civilians and Union soldiers who were returning home from the Battle of Atlanta. The conductor did not realize in time that the rail line was blocked until it was too late.

Anderson’s men quickly entered the train and separated the soldiers from the civilians and preceded to rob all of the passengers. Around twenty two Union soldiers were marched in a line off the train and stripped of their uniforms. The guerrillas then preceded to execute the entire line of Union soldier except for one Sergeant Thomas Goodman who they planned to exchange for one of their own men who had been captured. The train was then burned and the guerrillas rode south out of town to rendezvous with the rest of their contingent which was camped south of town. 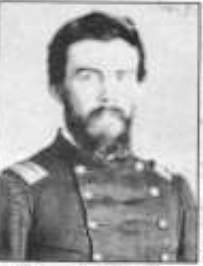 At around 3:00 in the afternoon, Union Major A.V.E Johnston and the 155 men of his green 39th Missouri Infantry regiment arrived in Centralia. Incensed at the scene he discovered , Major Johnston decided to pursue Anderson and his men south despite the warnings from the townspeople that there may be more. What Major Johnston didn’t know was that the number of guerrillas camped around Young’s Creek was around 400 men.

Major Johnston and the 39th Mounted Missouri Infantry rode south and encountered a few guerillas on horseback who preceded to lure the Union troops south toward their trap. Awaiting Major Johnston, was a line of Confederates mounted with the woods to their backs. Among these men were famous names like Cole Younger, Archie Clements, Frank James and the future famous outlaw Jesse James. 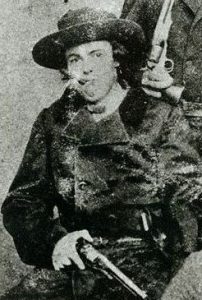 Major Johnston now believed he had Anderson’s men outnumbered and right where he wanted them. He decided that he would fight them on foot and ordered his men to dismount. The Union troops formed up with their rifled muskets and left several men to hold their horses. Major Johnston then ordered a volley from his regiment and several Confederates were struck down. At that precised moment the rest of the Confederate struck.

From three sides the mounted Confederates attacked from the woods with their multiple pistols blazing. Major Johnston’s men who were armed with single shot muskets were no match for the mounted guerrillas who were experts at this type of warfare. In a matter of minutes, most of Major Johnston’s command laid dead on the field. Major Johnston himself is rumored to have been shot dead by none other than sixteen year old Jesse James himself. 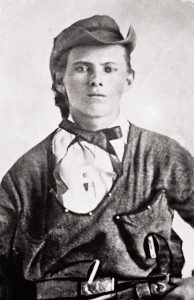 The Confederate guerrillas chased the survivors for miles and very few members of the 39th Infantry survived. In a drunken rage, the Confederate Guerrillas preceded to mutilate the bodies of the Union troops and in doing so shocked not only the Union government but the Confederate government as well. Three years of no quarter Civil War had turned Missouri farm boys into savages bent on revenge against the occupying Union forces.

Sergeant Thomas Goodman was later able to escape and tell the tale of the Centralia Massacre. Captain William (Bloody Bill) Anderson was killed a month later in Albany, Missouri.  The James and Youngers rode on to further fame. 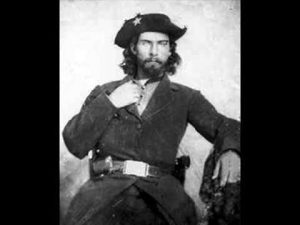